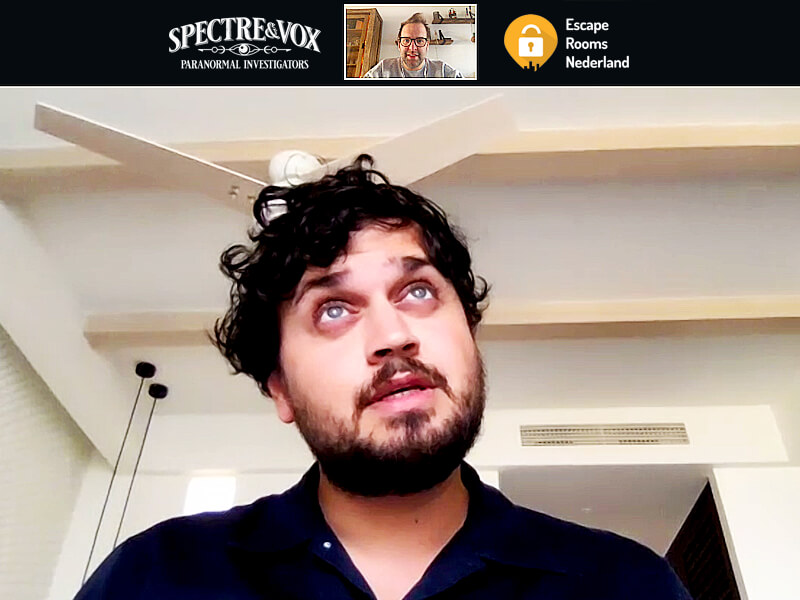 Why did you choose a home game?

“Immersive entertainment and game experiences remain the privilege of dusty warehouses and derelict buildings. We want to bring that sense of magic – the lights down, interactive experience to the home – and that’s what we’re trying to do with Spectre & Vox: something that’s particularly relevant right now, when so many people can’t leave their houses due to the COVID-19 Pandemic. If you have a look on our Kickstarter page, you can see much more how we’re doing it – lovely build, excellent sound design and voice acting and rich, theme driven storytelling. My favourite part of an immersive theatre show is that opening rabbit hole: where you move from the harsh world of the real into the carefully curated lights and sounds of the unreal – that transition, that moment of wonder is what we really wanted to recreate, but within the confines of an at-home experience.”

What are the things that make this game special?

“This kind of question always makes me feel like a salesman, which is something I am quite bad at! Really, when you boil down to it, it’s three elements.”

“Firstly, the product itself: my partner on this project, Glen Hughes, is pretty much the best escape room builder around. He knows how to build beautiful live games – the product is just beautiful: just look at the flickering custom lighting, the details of the individually cut and painted props and the quality of the finish. As a physical “object” it’s in a league of its own.”

“Secondly, it’s the sense of immersion – and naturally, that’s a lot to do with the sound, which is fully interactive. You will really get to feel like you’re *in the middle* of this case, plotting your route through a haunted house. If you look at the Kickstarter page, halfway down there’s a few samples of the audio from this particular case – it really gets across the atmosphere of how the audio will *feel.*”

“Finally – but probably most importantly for me, personally – is the story. This format allows for significantly more complex storytelling than the standard escape room format, which is a format hampered by time sensitivity and stories that almost always have a metaphorical or literal ticking clock, driving you forward. Discovery is consistently rated by enthusiast surveys as the highest rated part of any escape room, and I wanted to build an experience where discovery and narrative are inexorably intertwined.”

How do we recognize the unique Nick touch?

“I don’t know if there’s any unique Nick touch, but everyone has a different design ethos that drives them – and if there is one thing that satisfies me, its cohesion: world, tech, build, lights, everything working together in a way that creates something unified. It’s why I like making experiences that don’t break world, from beginning to end. Cohesion delights me – it makes games feel more real, like they’re only a whisker away from the possible. It’s also no coincidence that this game is set roughly fifteen years before the original Time Run game and has some of the same visual and thematic motifs…”

Can you tell us a bit more about the role of sound in the game? – What should I imagine when using the Amazon speaker?

“Sound is such a key part of the game, because it’s the way you plot your route through the game – if you have a look on the Kickstarter page there’s actually a very good sample of how the sound *feels*, too and the Kickstarter video is scored, like everything is and will-be, by our composer, the eminent Matt Farthing. The music is fantastic – we even had one man ask where it was from, as it’s not “Shazamable.” It’s from Spectre & Vox, my friend – now live on Kickstarter!”

“If you imagine, the Amazon speaker or phone app is your audio interface: it’s where you get audio chunks that advance the story, it’s where you have your inventory, it’s where and how you know where you are and where you’re going. Just to be absolutely clear, as it’s our most asked question: you do not need an amazon Echo for this to work, it works perfectly on any smartphone as well. Audio is such an underrated experiential tool. At screenwriting school, my tutor always said that radio is the most visual medium: if I play you the sound of rain and thunder, your mind is filled with images, more potent than any cinema screen. If I say in a radio play “I’m on the windswept tundras of an ice planet, framed by the light of glowing twin moons,” and have the audio to match, the image is already formed in your mind’s eye. Audio is the cinema of the imagination: we will be using it to full effect.”

Can you play it more often?

“You can play it as many times as you so wish – but I really want people to think of it like a truly immersive experience rather than a board game: a board game is a collection of random events within a framework and narrative wrapper. This is a concrete experience, with complex themes, excellent characters and a concrete and satisfying arc.”

What about different scenarios in the game?

“There are multiple different scenarios within the game, but they all play into the same overall meta-narrative. In the Deluxe edition – which, honestly, is the edition that I think everyone should get – if you look on the Kickstarter page you can see why – you get multiple scenarios, spanning generations. This house has a rich and storied history, and each scenario focuses on a different facet of its complex paranormal backstory.”

What would you like to call this game? A board game with puzzles? Or an escaperoom?

“I really want to think of it as an immersive experience for the home. It has a lot of the elements of an escape room, but it’s also about the lights, the sound: the atmosphere – that feeling of “transportation” that you have when you really lose yourself in something.”

“Of course, I am an escape room designed so I *speak* escape room – and a lot of the decisions I make are informed by that. But I’d like to think of it as its own, new beast – a thesis of all that that we like about immersive entertainment, a brand new format of immersive escape experience for the home.”

Do you have some examples of games that you really appreciate?

“Escape Games? I think the Netherlands, in general, has some truly stellar ones: Dark Park’s The End, for its theatrical and dramatic cohesion (and also incredible sound design Gijs is a master of theatrics) – The Dome, for its cosmic brilliance – The Vault for its dedication to immersion, The Catacombs… I could go on forever. Oh, what’s that one I also really loved? The Experiment in Zwolle – that was a tremendous experience, absolutely madcap. Aside from the Netherlands, my favourite European games, though, are probably The Room’s Brendan Darkmoor for its single focus – character, situation, motive. Lockhill’s The Sanitorium in Athens… The Chamber’s Project Poltergeist… There’s so much great stuff out there. And there’s so much I haven’t played. I’ve not played a Crime Runners game – now that’s a crime. The UK too has so many great companies. Escapologic in Nottingham, The Escapement in Margate… I could go on forever – I’ll stop there, for now.

Videogames are personally a major influence: I’m a big fan of Ken Levine of System Shock / Bioshock fame. For me, the “immersive sim” genre which he really mastered in System Shock 2 really is “the” key ludological influence on my particular style of game design. I’d love to meet him, one day. Ken, if you’re reading this, I love you!”

Is the game comparable to anything?

“Think of it as… if the X Files were set in the late 19th Century, with a peppering of Broken Sword. Also, if you’ve played Time Run… that, too.”

Isn’t the shipment of the game too expensive?

“Honestly, I think you’d struggle making any kind of game like we’re making – a fully built, hand-painted, immersive set with 260-ish laser cut parts and inbuilt lighting for any cheaper than we’re doing. We’re doing *every single* element in-house with no external markup: it’s a genuine miracle we can get it done for this price, believe me – and if you look at the Kickstarter pictures I think you can see why!”

“As I said above, to make a product as complex as this is, naturally, a risk: fortunately a lot of these are allayed by ensuring that every unit we make is matched with a backer. Our goal isn’t to get rich on this project – our margins are modest. We want to make sure that we are making stock that’s going straight to the people who want to actually own this product, which is why it’s a Kickstarter exclusive.”

Are there any stretch goals?

“Oh, yes. We’ve just reached our first goal at 100k and are about to announce our next one – but there’s a REALLY, REALLY special one down the line, which if I told you would make your head explode. Blood everywhere: bang, all over the shop.”

Are there other things you are currently working on?

“Yes, but at the moment and for the foreseeable, Spectre & Vox is my complete focus! Some of the future things, also, will make your head explode – so for now, I’ll let your necks rest easy.”

Are you looking forward to Operation Pandora?

“Operation Pandora is going to be absolutely incredible and Joeri is a visionary. When Operation Pandora is fully realised it’s going to change the face of the immersive landscape. If you’re not following the crowdfunding for it, you really should: it talks much better than I do and gives some of the glorious visuals that Joeri has put together.”